​Aaron Bhatnagar and his family interests commenced their investment in Pushpay in February 2014, co-investing as pre-IPO venture capital funders alongside the well known Huljich family. They continued to fund Pushpay before the company's listing on the NZAX in August 2014, as well in subsequent capital raises. In addition, they helped introduce other investors to the company to help build a reliable and sizeable consortium for Pushpay to grow with.

Pushpay was founded in 2011 by Eliot Crowther and Chris Heaslip who wanted to make fast and easy payments. This idea grew into a concept for a world-class commerce exchange to handle consumer transactions with ease, speed and efficiency, without the hassle of logins and bank account numbers.

Pushpay has focused with churches and the not-for-profit sector, addressing the problem that donors didn’t give due to payment friction and various complexities. Injecting easy 10 second payments via Pushpay revolutionized the way many US church ministries operated. 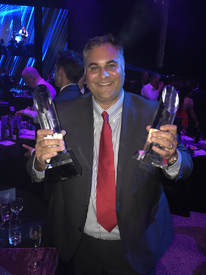 As an investment story, the company has been a stunning success, with the company growing from a $50m NZD market capitalisation at IPO (August 2014) to over $1.2 billion NZD as at March 2018). NZ IPO investors have had an over 17 times return.​

Pushpay has offices in Auckland, New Zealand, and Redmond, Washington State, USA and staff numbers have grown from around 12 in early 2014 to over 350 by January 2018. It has grown ACMR revenue from $1.8m NZD to over $140m NZD since IPO. As of October 2017, over 50 of the top 100 churches in the USA use Pushpay, and over 7100 churches in total use Pushpay.
​
The company has won a number of awards, such as the founders winning EY Young Entrepreneur in 2016, and picking up numerous Stevie awards for customer service in 2016 and 2017. Pushpay won the overall PWC Hi-Tech company of the year award, and the IBM Innovative Company award at the 2017 Hi-Tech Awards. In total, it has won over 50 awards since the company's inception.

The Bhatnagar family exited their position from Pushpay Holdings in May 2020.

(Some text sourced from https://pushpay.com/about-us)